Julian Scadden, by his own admission, was not always all that likable.  He had some rough edges.

But that was a long time ago.  The 67-year-old Vietnam-Era Veteran now spends his days doing quieter work.  He’s a housekeeping aide at the Denver VA’s Community Living Center. But his custodial skills are not his primary contribution to the hospital.   Over the last nine years Scadden has developed another skill:  comforting Veterans in their final hours.

“Julian is an incredibly important part of our care team here,” said Dr. Elizabeth Holman, a palliative care psychologist who works with Scadden. “He has an instinct for what people need when they’re nearing the end.  Sometimes they just need his quiet presence.  Sometimes they need words of encouragement.  He’s just so ‘present’ with these Veterans.  He makes them feel safe.”

“He’s so humble…he doesn’t realize the tremendous value of his services, and of his heart.”

She continued:  “It makes such a difference, to spend your last moments with someone who is kind and caring. And it’s such a comfort to family members, knowing that their loved one wasn’t alone when they died.”

Scadden’s training, however, got off to a rough start.  At one point his trainers began to wonder if he really had the ‘right stuff’ to become a member of the Denver VA’s Compassion Corps  —the volunteers who spend time with dying Veterans.

“They had their doubts about me,” he said.  “During training they told me I was doing everything right except one thing.  I said, ‘What’s that?’  They said, ‘You have to learn how to talk to people!’”

It was a sad truth.  Scadden’s people skills had become a bit rusty.  He had plenty of compassion, but it was hidden somewhere deep inside where no one could see it.

And so he learned. 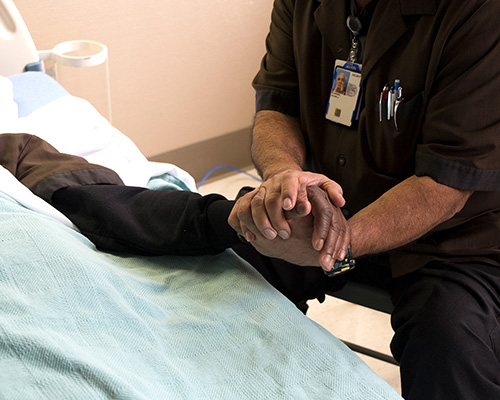 Of Ducks and Water

“I’m glad they were patient with me during the training,” said the Army Veteran.  “Once I completed the training they just put me out there and I took to it like a duck to water.  And it’s made me a better person, to be honest with you.  I think this is my calling.  This is what my higher power wants me to do.”

But not all patients — even those who are dying — believe in a higher power.  And that’s okay with Scadden.

“My very first patient didn’t believe in a higher power,” he recalled. “But about a week before he died, he told me to thank my higher power for allowing me to be there with him.”

Scadden said that during his nine years of hospice work he’s seen some patients get very angry at what’s happening to them.  Some get mean.  Some get abusive.

“You see every kind of scenario,” he said.  “Some of them are just scared, or confused.  They don’t want to die. They’ll ask things like, ‘Why me?’   They feel like they’ve led a good life, and they don’t understand why they have to go through all this suffering.”

Other patients, as the end nears, slip quietly into a coma.  Scadden said this can be unsettling for some family members, who feel they can no longer communicate with their loved one.

“Just because their eyes are closed doesn’t mean they can’t hear you,” he said.  “I try to explain that to the family.  I tell them, ‘Talk to him, tell him you love him, because he can still hear you.”

To learn more about how to become a volunteer at a VA near you, visit www.volunteer.va.gov/programs.asp