Home » Benefits » Be There for a Veteran in Crisis
ShareTweet

Be There for a Veteran in Crisis

September is Suicide Prevention Month. The campaign for this year is Be There.

Be There to help a Veteran or Service member in crisis feel less alone.

Be There to help those who are having thoughts of suicide to find critical and appropriate resources.

The National Veterans Creative Arts Festival was there for Army Veteran Connie. An over-the-road truck driver, he had made his plans to end it all. But decided to make one last stop at the Festival and it saved his life.

“I walked through those doors and was embraced and treated like a human being. We talked for hours and they saved my life.”

The Salt Lake City VA Medical Center was there for Veteran Stu Shipley. Today, he shares his story and is there for other Veterans.

The Birmingham, Al, VAMC was there for a 63-year-old Vietnam era Veteran who called and told the Suicide Prevention Social Worker that he had pills laid out in front of him and was intending to overdose and just wanted to let someone know.

He was undergoing tremendous financial and family stress and felt hopeless, helpless, and truly felt suicide was the best way to end his suffering.

The social worker talked with him for an hour and was able to successfully provide support and validation and instill hope in his circumstances.

He agreed to resume receiving mental health services and said the social worker had saved his life and expressed appreciation.

VA social worker Amy Burks was there for a 28-year-old OIF Veteran who shot himself in the head in a suicide attempt while under the influence of alcohol.

It has been a long four years for this Veteran, but through the caring support of many VA disciplines this Veteran was able to complete what would be a very lofty goal for anyone, let alone someone who had a head injury and significant PTSD.

He continues to enjoy and raise his 5-year-old son and serve as a positive example for other Veterans. 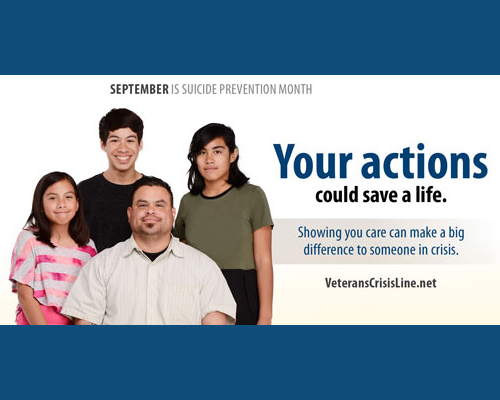 A Veteran called the Suicide Hotline and the staff got him to go to the inpatient psychiatric unit at the Kansas City VA. A week later, he entered the domiciliary and was treated there. He was then referred to HUD-VASH and has been in the same apartment through that program since 2009.

Thanks for Being There

A Veteran who once wanted to take his life came to the Kansas City VA Medical Center, saying that he is so grateful for the care he has received, that he feels a commitment to get involved with the VA in a way to help others, and he wishes he could speak, and get his story out there in order to reach out to others.

“We talked for hours and they saved my life.”

VA mental health information can be found on the VA Mental Health page at: http://www.mentalhealth.va.gov/

Information about the Crisis Line is available at http://www.veteranscrisisline.net/.

Previous: News Releases – Office of Public and Intergovernmental Affairs
Next: Quarantined Sailors Take to Balconies to Cheer for the Marines Helping Them