She had been going in for her annual mammogram for about seven years and always got the good news that there was no evidence of cancer.

Last year, she had her mammogram at the Phoenix VA Medical Center where they have digital breast tomosynthesis (DBT), also known as 3D breast imaging, where the x-ray tube and imaging plate move during the exposure.

According to Dr. Katherine Martin, Director of Breast Imaging at the Phoenix VA, “DBT’s biggest advantage is its ability to create multiple thin slice images of the breast, which allow the radiologist to better distinguish between overlapping dense tissue and a true underlying mass or distortion, which leads to a significant reduction in unnecessary callbacks from screening mammography.

“Instead of taking a single picture of the breast like the older mammography machines, the 3-D machine takes multiple thin slice images through the breast that the radiologist is then able to “scroll” through. This is similar to a CAT scan that takes multiple slices of the body.”

Myers’ DBT mammogram found a very small cancer behind some scar tissue. “My oncologist said it was exceptional that they found something so small,” she remembers.

A biopsy and two opinions confirmed the findings.

Screening is an important preventive measure for every woman to take.

Following her surgery last December, Myers felt she was “blessed” with the “wonderful care from everyone at the Phoenix VA.” An Air Force aerospace ground equipment mechanic accustomed to precision performance, she said everyone went “above and beyond” in taking care of her.

According to Lisa Wall, “At VA, there are 54 in-house mammography programs, with 15 of those programs offering digital breast tomosynthesis (DBT). Use of 3D imaging has been shown to increase the cancer detection rate in women with dense breasts.” Wall is VA’s Mammography Program Director. 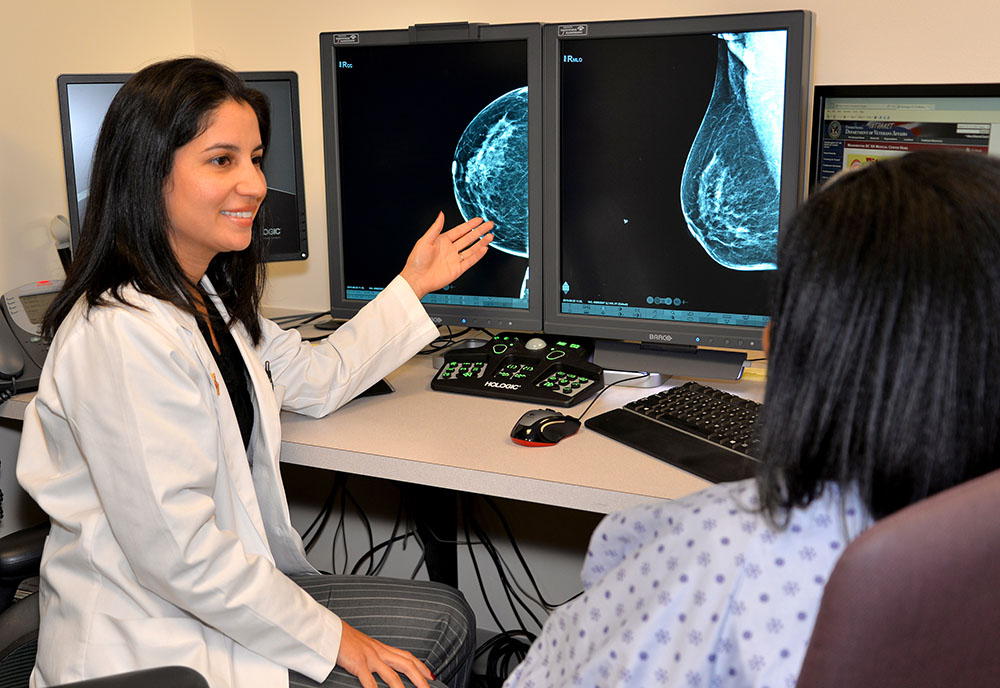 
One of the other locations with the DBT technology is the Washington D.C. VA Medical Center where Dr. Tahira Ahmed is the Chief of Breast Imaging.

She explains the procedure: “The patient is put in the standard compression positions and the tube overhead moves in an arc taking sequential images at 15 degree intervals. The images are then digitally reformatted and viewable to the radiologist in a scrolling fashion. This technology helps decrease the biggest cause of recalls in mammography — overlap of tissue.”

Ahmed also notes that Veterans like the new program and more are taking advantage of it.

“The same-day results, same-day diagnostic studies, and same-day biopsies are a huge hit with our Veterans. They are pleasantly surprised with the level of service they receive and appear to be spreading the word because our mammography usage has jumped 414 percent since inception. We have also decreased the fee-based “outsourcing” of mammography services to other hospitals by 80 percent in less than a year.

“The best overall reaction I’ve gotten thus far, which is the most common response, comes from non-Veterans who say, “Gosh, I wish I was a Veteran so I could get my mammogram done at the DC VA!”

“My chance to make a difference.”

Both doctors love their jobs and have personal motivations for working at VA.

Dr. Martin: “I enjoyed working at VA hospitals during my medical training, which is where I met my husband who is a Marine Veteran. Being married to a Veteran helps me appreciate the many sacrifices that our Veterans have made. I am glad that I can contribute to the health of this unique patient population.”

Dr. Ahmed: “During high school I volunteered at the Miami VA for several years, which eventually led to a paid clinical research position in college. I enjoyed working with the Veterans so much that when the opportunity arose in DC to help develop and create a brand new mammography section, I eagerly pursued the position because it was my chance to make a difference and give back.”

October is Breast Cancer Awareness Month, time to remind all VA patients about the importance of early detection. Find more information about breast cancer from the Centers for Disease Control and Prevention (CDC).

Previous: Ex-Green Beret behind Venezuela raid suspected of plagiarism
Next: After Crozier Firing, Top Admiral Tells Sailors to ‘Show Courage in Speaking Up’