Home » Benefits » Can Yoga Ease Your PTSD? VA Wants to Find Out
ShareTweet

Veterans in the yoga study group work on perfecting a pose under the gentle guidance of Lead Yoga Therapist Nancy Schalk.

A VA psychologist in Indiana is exploring the effects yoga might have on Veterans suffering with posttraumatic stress disorder.

“There’s just not that much research out there yet about the effect of yoga on PTSD symptoms,” said Dr. Louanne Davis, a clinical research psychologist at the Indianapolis VA and an associate scientist in clinical psychology at the Indiana University School of Medicine.  “But we know that yoga is soothing.  Yoga is very meditative and emphasizes being aware or mindful of your breathing and how your body feels moment to moment. This type of practice stimulates the calming branch of the nervous system and helps to reduce the hyperarousal that is one of the symptoms of PTSD.”

“Yoga sends a message to the brain that all is well.”

She added: “I hope the results of our study will help inform VA policies down the road in terms of what we can offer Veterans who are suffering with PTSD.”

According to VA’s National Center for PTSD, about 8 million adults in the United States are dealing with PTSD during any given year.

“When you have PTSD, traumatic memories and reminders constantly stimulate your nervous system, preparing you for fight or flight,” Davis explained.  “This cycle can lead to reoccurring anxiety and stress.  It’s exhausting, both mentally and physically.  It also has a lot of negative impact on your immune system.  And it can lead to other mental health problems, like depression.”

Davis said each Veteran in her study is assigned to one of two groups: either a class where participants practice nothing but yoga, or a control group where participants go for walks and engage in other health-related activities.  Both groups meet once a week for 90 minutes. 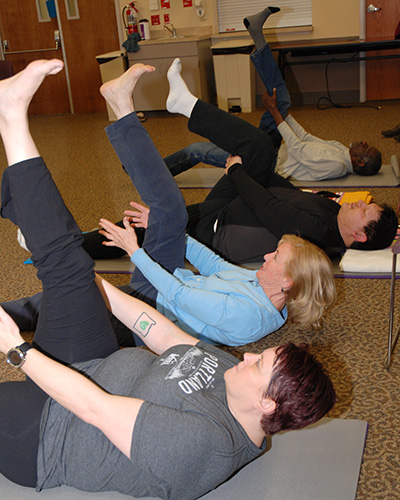 Veterans engage in a yoga pose designed to stretch their muscles, release tension and focus their thoughts

“My dad was a WW II Veteran,” said Nancy Schalk, the lead yoga therapist on the yoga teaching team. “His tool for coping with his PTSD was alcohol.  It’s much more empowering if we can learn and use some other tools.”

Schalk said she’s been practicing yoga for more than 40 years, starting when she was a teenager.

“Through yoga we’re giving our brain a healthy experience, over and over, that gradually helps us feel safe again,” she said. “For example, the breathing exercises we do purposely shift your nervous system from the ‘fight or flight’ side to the ‘rest and renew’ side.   It’s like your brain is saying, ‘Oh….this is how we breathe when we feel safe.’  You do this over and over, and you train your brain to change, to feel safe.  Yoga helps change your brain back to its pre-trauma state.”

Schalk said one of the hallmarks of PTSD is a tendency to isolate, which only makes matters worse. 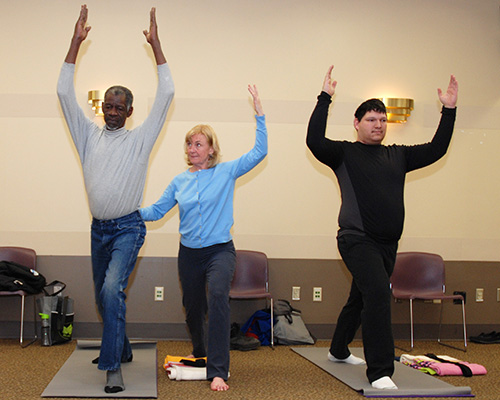 Lead Yoga Therapist Nancy Schalk helps a Veteran with his posture during a yoga pose.

“Isolation is a downward spiral,” she said. “We think yoga helps reduce the need to isolate by lowering general anxiety.”

The yoga therapist also noted that the simple act of attending a yoga class is — in and of itself— an isolation-killer.

“One of our study participants told me she just wanted to stay inside her home, but that going to yoga class has given her incentive to leave her house and interact with people. Also, Veterans trust and relate to each other, so just the act of participating in the yoga class with other Veterans is beneficial.”

One of those Veterans, Debra, said she was initially skeptical about the potential benefits of yoga.

“I think I wanted to be in the control group, not the yoga group,” she admitted. “I really wasn’t excited about the yoga thing, because I’d never done it before.”

Debra, who spent 22 years in the Army National Guard, said she began to lose her skepticism about one month into the study.

“Maybe around week three or four I realized I was getting excited, looking forward to my yoga day. I ended up really liking it.  I think I get the most out of the deep breathing; it helps me relax when something stressful happens.  I’ve tried therapy, and medications.  It helped some, to a point.  But I think yoga is the best thing for me.”

In addition to 90 minutes of mindful breathing, Debra said she’s also come to appreciate another aspect of the class.

“One of the best parts comes near the end,” she said. “That’s when you’re lying down with your eyes closed, and the instructor is talking to you in her quiet voice, and you’re almost asleep because you’re so relaxed.” 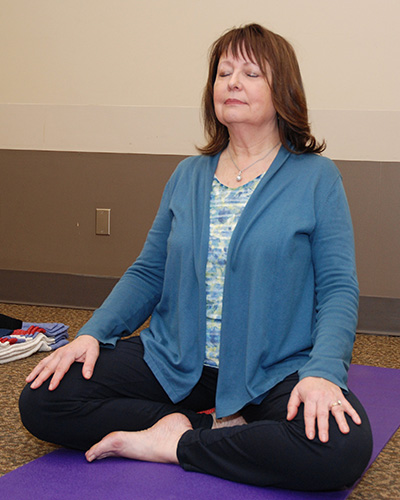 To learn more about how VA is helping Veterans with PTSD, visit the VA National Center for PTSD Website at www.ptsd.va.gov

Previous: For veterans who missed out on COVID stimulus cash payouts, VA and IRS have a quick fix
Next: Army Wants 20mm Cannon, Supervised Autonomy for New Scout Helicopter