By By Tom Cramer

“I get that all the time, that West Side Story thing,” said Maria Beltran, a social worker at the Phoenix VA. “It’s okay. I’m used to it.”

But West Side Story aside, the 35-year-old Army Veteran has been nothing less than a godsend to dozens of homeless Veterans who sleep under bridges, on park benches or anywhere else they can find to lay their heads at night.

“Some of these Vets, they’ve been out there so long, it’s all they know.”

Seek and Ye Shall Find

“We have six social workers here,” explained Beltran, who did tours in Iraq and Afghanistan before coming to the VA in 2013. “Our job is to go out there and find these Veterans, make contact with them, engage them. We explain what we can do for them, let them know we can find them a place to live, something to eat, clean clothes to wear.”

It’s not the kind of work everyone can do. After all, walking up to homeless strangers and striking up a conversation isn’t everyone’s cup of tea. But Maria Beltran, an energetic extrovert with an endlessly sunny disposition, seems to be built for it.

“We try to just talk to them to see what they need,” she said. “If they want housing, we can do their housing assessment right there, on the street, because we always bring our computers with us. Or if they’re willing to come to the office to do their paperwork, we’ll give them a ride. We all take turns driving the shuttle bus. Even my boss drives the shuttle.”

Beltran’s line of work may be challenging, but it has its perks. For instance, there’s never a dull day. 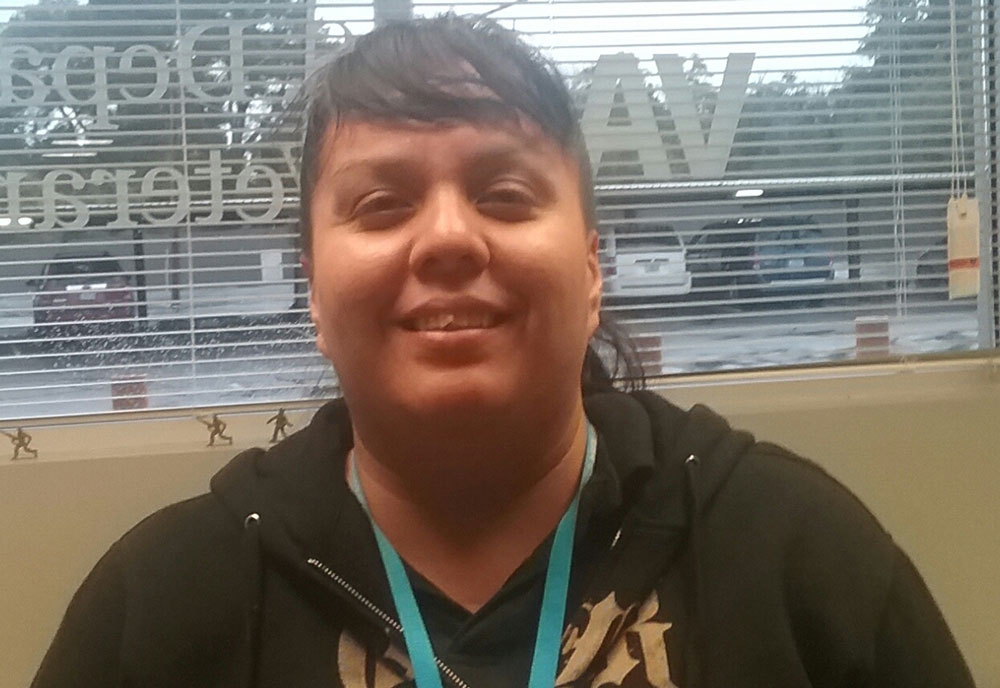 “We had an elderly Veteran come into the office one day,” she said. “He had to be over 80 and he was homeless. He brought his wife with him. She was in her 30s and about eight months pregnant. She also had her 18-month-old daughter with her.”

“The first thing we did was get them diapers for their 18-month-old. Then we gave them a gift card for food, because they were hungry. The following day we got them into an emergency shelter. By the following week, they were in their own place through our Supportive Services for Veterans and Families rapid-re-housing program.”

Beltran paused and smiled. “That was my little family,” she said. “They even called us recently to let us know how they were doing. That was nice.”

Then there are the homeless Vets who have no one left in the world.

“One day we found this female Veteran at one of the homeless kitchens,” Beltran said. “She was crying when we found her. She had served during the 1970s. I don’t know how old she was but she was using a walker and didn’t have a place to live. She wasn’t enrolled with the VA so we contacted our regional office and they were able to send us her DD-214. So we got her enrolled, and got her into one of our transitional beds that same day.

“The following week she was approved for our HUD-VASH program to obtain permanent supportive housing. That was kind of nice to see. A lot of different people worked together to make that happen, to get a roof over her head.”

The most heartbreaking cases, perhaps, are the Veterans who don’t want a roof. They prefer the park bench, an underpass or a tent.

“They just don’t trust anyone,” Beltran explained. “Some of these Vets, they’ve been out there so long it’s all they know. So you just keep approaching them. You talk to them, try to get to know them. Sometimes, all they want is someone to listen to them. So we listen.”

She continued: “We found this one Vietnam Veteran who keeps telling us he’d rather sleep in his tent outside. He won’t let us help him. So all you can do is give him a hygiene kit and keep following up with him to see if he’s ready to accept some help.

“I haven’t seen him for a while now,” she added. “The nights can get chilly here. I hope he’s okay.”