All it takes is for you to make the decision to enter.

Are you a Veteran with a drug or alcohol problem? Sick and tired of it?

Then a four-week lockdown at the Colmery-O’Neil VA Medical Center in Topeka, Kan., may be just what the doctor ordered.

Sounds a bit extreme, perhaps, but it may be the fresh start you’ve been needing.

“We’re not prison,” observed Dr. Sherry Martin-McCaughtry, who works on the unit. “We don’t do strip searches or anything, and you can leave any time you want. This program is 100 percent voluntary. But it is a locked unit.”

She’s means it. This is not your run-of-the-mill rehab program.

“We had a lot of Veterans coming here to Topeka for three to five days of detox,” explained Martin, an Army Veteran who served during the First Gulf War. “But following detox, we didn’t always have a good next step for them. So we came up with the idea of four weeks of intensive therapy in a secure environment.”

The program was launched in early November 2014.

“We’re a locked unit because even though you’ve detoxed, you’re still at high risk,” Martin emphasized. “And if left unattended during this vulnerable period, you have a much higher risk of relapse. So we don’t want you being by yourself while you’re here with us at Fresh Start. You can have visitors, of course, but a staff member is going to be around at all times.”

At all times? You bet.

“If you have the wrong kind of visitors coming to see you, then you’re in danger of relapsing,” the doctor explained. “We don’t want that happening. We want a staff member with you at all times to help you make the right decisions.

“From 9 to 11 a.m. is our core issues group where we engage in cognitive behavioral therapy,” Martin said. “It’s the core of our program. It’s where the real work gets done.”

So, when you’re in Fresh Start, do you ever get a moment by yourself?

“You’re in your own room only when you’re sleeping,” Martin said. “The rest of your day, we want you with people.”

“Even when you’re sleeping, they come around and check on you every half-an-hour,” said David, a retired Air Force major who recently graduated from Fresh Start. “It didn’t bother me at all. The social workers, the psychologists, the nurses — the entire staff was very kind. They bent over backwards for us. They were very dedicated to us.”

The doors are locked not to keep you in, but to keep bad influences out.
Dr. Sherry Martin-McCaughtry 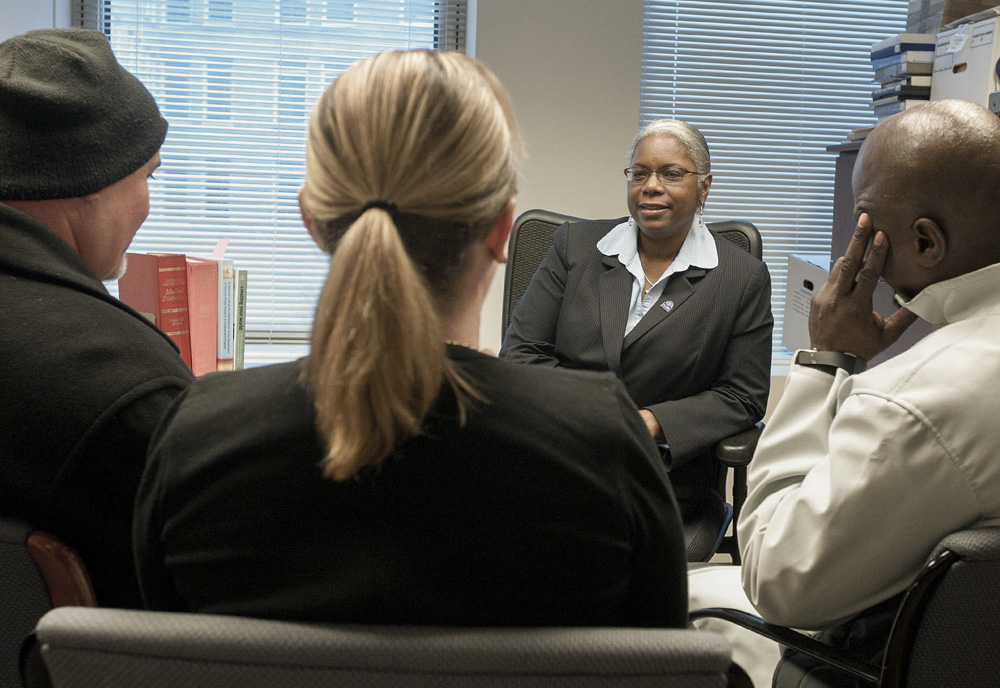 Cognitive behavioral therapy. “It’s where the real work gets done.”


Best Decision He’s Ever Made

Dave, who flew an F4 Phantom fighter-bomber during Operation Desert Storm, described himself as a binge drinker who would often go for long stretches without alcohol.

“Normally it takes some negative event to trigger it,” he explained. “I was dating this girl for about four years and we recently broke up. That was my trigger.”

But after his last binge, the 63-year-old Veteran decided enough was enough.

The former pilot said checking into the Fresh Start program was one of the best decisions he’s ever made.

“We had one girl and about 15 guys in the program,” he said. “I became good friends with the girl. We’d exercise together by walking up and down the hallway every day. Sometimes they’d let us go outside and play some basketball — with a chaperone, of course.”

Multiple Detoxes but She Made it Through

Dr. Alicia Wendler, a psychologist who leads discussion groups at Fresh Start, said the comradery that develops among the patients is a significant factor in the program’s effectiveness.

“The Veterans help each other,” she said. “They support one another. When people are in a secure environment together for 30 days, they get to know each other very well. You’re all going through the same thing.

“We had a female Vet in the program who’d had multiple detoxes in the last year,” Wendler continued. “But she made it through this program. I believe it’s because she had these 30 days of being away from any triggers, any stressors, and having that 24-7 support from our team as well as her fellow Veterans.”

Need help for a drug or alcohol addiction? Search VA’s Substance Use Disorder Program Locator to find the help nearest you.

Previous: First Nation Loves Our Veterans | 1,500 Heroes Housed and Counting
Next: Treasure Hunter Says He Was Tricked by Con Man Claiming to be a War Hero Scientist