In a series of thumps, whirrs and clattering noises, Brandon Myers was able to achieve what his body would no longer let him do on his own. Augmented by brace support, motion sensors and a computer control system and further aided by his caregiver and crutches, he slowly walked forward in an upright posture. His steps were small and unbalanced at first but became more fluid as he got used to the machine saddled to his torso, hips and legs.

“This exoskeleton is not quite as fluid or fast as a robot you would see in a science fiction movie but its light years apart from what I can do in a wheelchair,” Myers said as his face lights up with a smile. “Now I can walk.”

The Navy Veteran participated in a trial demo at VA San Diego Healthcare System on March 14 with the intention of moving one step closer to the goal of owning his own exoskeleton. For many with spinal cord injuries (SCI) causing paralysis to the lower extremities, being able to walk again is the promise of a better quality of life.

Since losing the use of his legs during active military service, Myers has dreamed of being able to do the little things again that often require a standing position, like making dinner on a countertop. With the exoskeleton, many abilities lost by having a spinal cord injury are possible again. 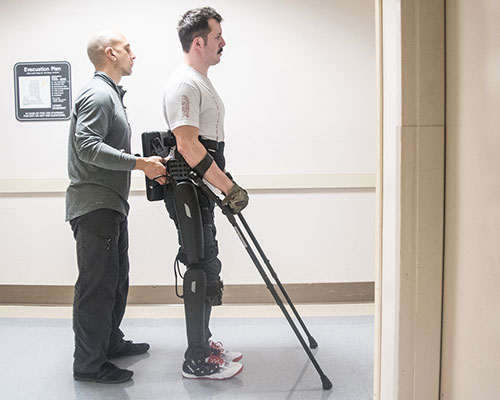 According to John Colaneri, VA physical therapist trained on the system, the ReWalk Exoskeleton equipment has motors at the hip and knee region that give the user the ability to stand from a seated position. With the assistance of a caregiver and the use of forearm crutches, wearers bear weight through their bones in their legs, allowing them to take steps without needing to contract muscles. In addition, the structural support of the exoskeleton at the hips and knees helps with moving the patient forward.

“Because it requires assistance from a caregiver and crutches, the exoskeleton doesn’t give a patient the ability to walk completely independently and won’t fully replace the need for a wheelchair,” said Colaneri. “Instead, it allows users to walk within their communities and perform some functional tasks while standing.”

“I faced harder goals in the military.”

Health-wise, using the exoskeleton also improves gastrointestinal function and circulation and may improve bone density as dormant bone structures in the legs become active once more.

While it’s currently being offered to patients paralyzed by spinal cord injuries, they must meet medical requirements that include the Veteran retaining use and strength of the upper body and a dedicated caregiver to assist when using the exoskeleton.

An interdisciplinary care team evaluates the patient for other criteria including height and weight requirements and a battery of screening tests that require medical, social work, occupational health and physical therapy approval. Once approved, the patient can begin trials. 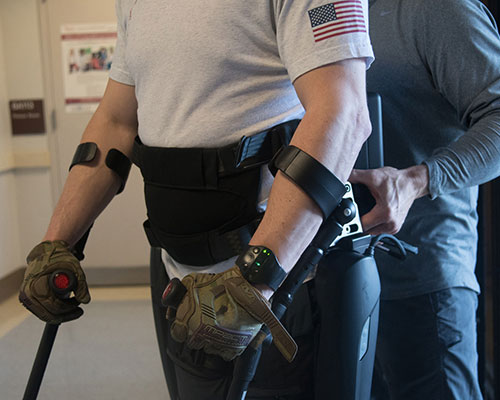 Trials feature a 45-day period of learning how to use the exoskeleton in the SCI gym, followed by another 45-day training period for home use. At the conclusion, if the Veteran is still interested and has met all of the goals of the training program, the medical center will put in a request to have the equipment ordered for personal use at no additional cost.

“It’s a long road to get one of these things,” said Myers of the exoskeleton. “But I faced harder goals in the military and harder challenges since my injury. Compared to either, the testing and screening really is a small price to pay for being able to stand on your own two feet.”