Elilgio Ramos (second from the right) with his platoon of the 250th Field Artillery Unit.

These days, losing a wallet can be quite frustrating and the chances of getting it back are rare. Imagine a lifetime passing by, then receiving a letter informing you your long-lost wallet had been found in a faraway country more than 6,000 miles away. 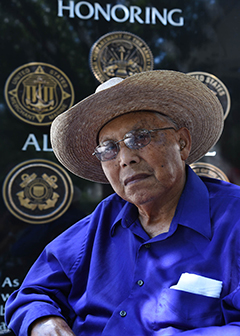 Eligio Ramos joined the Army more than 70 years ago. Like most young men in those early days of WWII, his sense of patriotism led him to the local recruiting station in Harlingen, Texas, to sign up to join the war.

He was 17 at the time, and was soon off to serve in the bloody battlefields of WWII, assigned to the Army’s 250th Field Artillery Unit.

Elilgio’s son, Rosando Ramos, recalls many of his father’s stories. “He fought with the 250th Artillery helping liberate starving prisoners,” said Rosando, pointing to his father in a picture with his platoon posing next to an M119 Howitzer cannon.

Rosando explained that his father served from 1942 to 1945 and took part in the liberation of prisoners from many concentration camps in Europe.

“They were coming out dying in peoples’ arms, but at least they were free,” said Rosando, who remembers many of stories his father once told him.

Those memories faded for decades in the Ramos family until recently, when a package arrived at Eligio’s house. It contained an old vintage leather wallet, deteriorated and torn. The leather had expanded from years of harsh weather conditions, but inside contained a treasure trove of memorabilia. 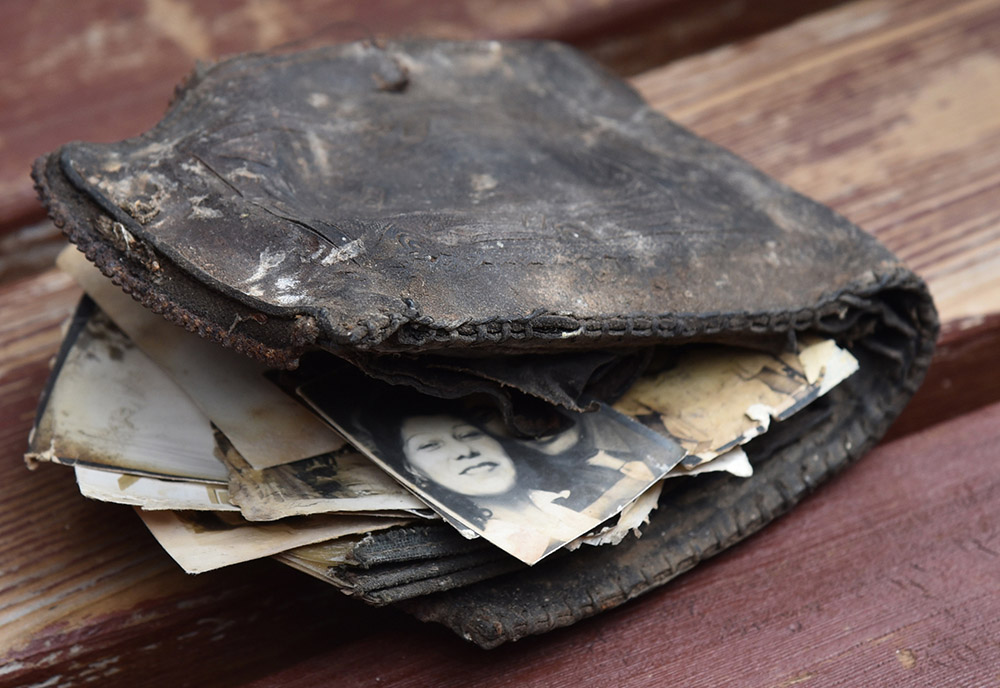 A few weeks earlier Eligio’s daughter, Sylvia Gonzalez, 72, was visiting her father, as is her routine three times a week. They were having breakfast and while going through the mail, she stumbled on a letter she almost discarded as junk. She noticed it had a stamp from Austria and that tempted her curiosity.

“I can’t believe this,” said Gonzalez when she opened the letter. “Look Dad! This letter says somebody found your wallet you lost in 1945 in Austria and they are looking for you.”

Eligio gazed at his daughter for a few moments.

“Do you remember losing your wallet?” said Gonzalez, still surprised and amazed.

Gonzalez soon notified the rest of the family and the following weekend gathered at their father’s house to discuss the issue in further detail. They designated Eligio’s grandson, Gabriel Gonzalez, Rosandos’ son, to correspond with the man who had sent them the letter. Gabriel began communicating with Dr. Josef Ruckhofer, of Salzburg, Austria, who found the wallet while working with his father in an old farm house.

“It was in June this year,” said Ruckhofer. “We removed some of the old wooden planks from the backside wall. When I looked to the bottom, I found this old leather wallet, a little bit dirty, but still okay.”

Ruckhofer said that when he opened the wallet he found a lot of old photographs, some old stamps, some papers and an American Soldier’s ID card from 1945.

“The photos showed mainly an American Soldier in uniform, ‘Mr. Ramos,’ and apparently his family,” said Ruckhofer. “On the ID card I found the name, his birth year and his hometown in Harlingen, Texas.”

Ruckhofer calculated Ramos’ age as 91. “If this man is still alive, what a big surprise it would be to get his wallet back 70 years later,” said Ruckhofer.

Ruckhofer explained that he began searching on the Internet and soon discovered that Ramos was a very common name. “I found a lot of names in Harlingen, Texas. I sent an email to one of them, but did not get an answer,” said Ruckhofer.

Ruckhofer then expanded his search to the entire U.S. “I found a page with information that a Mrs. Ramos had passed away in January this year, leaving her husband Eligio Ramos,” said Ruckhofer. “On another page I found the address of Mr. Ramos in Madera, California.”

Ruckhofer tried his luck and sent a letter. “I sent the letter with a copy of the ID card and some photos asking if he was the man I was searching for,” said Ruckhofer. Two weeks later towards the end of June, Ruckhofer received an email from Gabriel confirming he had found the right person.

“I also received a photo of Mr. Ramos, so I promised I would send him back the wallet, which I sent towards the end of June,” said Ruckhofer.

The wallet arrived in July in Madera with the following note: “Dear Mr. Ramos! I am now sending you back your wallet you lost 70 years ago in the farm house of my grandfather in Salzburg, Austria. I am delighted that you will receive your memorabilia in good health. Best wishes and greetings from the Ruckhofer family from Salzburg, Austria.”

On Tuesday, August 4, Eligio and his family, including some of the people pictured in photos in the wallet, gathered at the Fresno VA Healthcare System to share in this special reunion.

“If this wallet could talk,” said Rosando, “it would have a lot to say about history.”

Gonzalez said they plan to frame the wallet and the items it contained. “We are going to display in my father’s house for all the family to see when we go visit.”

Watch a video of the Ramos family talking about the experience and see more photos from the wallet and the farm house where it was found.