Josie Beatty’s nightmares began some time before she left military service in 2006. She’d spent 15 years in the Air Force, a lot of those years working in the mortuary at Dover Air Force Base in Delaware.

“My unit handled mass causalities, and most of them were coming in from Iraq and Afghanistan,” she explained. “Sometimes, when they unzipped the body bag, the person inside looked peaceful, like they were just sleeping. Other times, it was the opposite, especially if they’d been killed in an explosion, a helicopter crash, or something like that. Sometimes they weren’t even in one piece.”

Nonetheless, a Servicemember’s remains still needed to go through a carefully orchestrated process in order to be positively identified. It required a team of specialists.

“It’s not like anything you could ever imagine,” Beatty said. There’s fingerprinting, dental records, x-rays, and DNA work. Then you have the autopsy and the embalming. It was my job to escort the body throughout this whole process, taking them from station to station. I watched over them. It was a very long day, 13 or 14 hours. But of all the jobs I did in the Air Force, I viewed this one as the most honorable.”

With each passing day, however, more and more disturbing images were accumulating in Beatty’s mind.

“When you feel safe, the walls start to come down. You can begin to heal.”

“The images go in, but they don’t come out,” she said. “When you’re working around death all the time, you learn to detach yourself. You know this is someone’s brother or sister, someone’s son or daughter, but you have to detach or you’ll end up getting hysterical.”

But detachment, as a coping mechanism, only works for so long.

“After a while I began to have trouble handling what I was seeing,” said the 44-year-old. “And I didn’t have anybody to talk to about it. I was a tech sergeant E6, and a supervisor, and I didn’t want anyone thinking I couldn’t do my job. I didn’t want to be the one person in my unit who came up short. So you end up carrying it all around inside you.”

After leaving the Air Force, Beatty landed a job doing administrative work for the Department of Defense at Fort Belvoir, Va. But by then, the repeated trauma she had experienced during her mortuary work had begun to noticeably manifest itself.

“I was having trouble sleeping,” she said. “I was having unexpected flashbacks, and I was having nightmares. It affected every aspect of my life. The relationship I was in fell apart because I was emotionally shut down. I’d spent years detaching myself, shutting down my emotions so I could protect myself and do my job. But now I was stuck in shutdown mode. I knew something was wrong with me, but I couldn’t figure out what it was.”

But people around Beatty knew something was wrong.

“I was getting progressively worse,” she said. “Finally one day my boss came to me and suggested that I talk to someone. He recognized that something wasn’t right with me. So in 2013 I went to the VA outpatient clinic at Fort Belvoir and they referred me to a Vet Center. They told me someone there would be able to help me.” 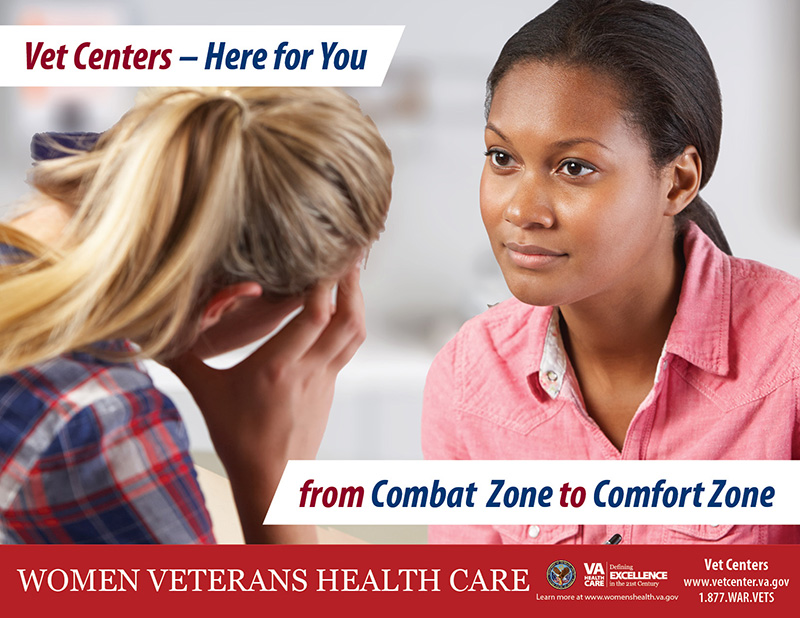 As fate would have it, there was a Vet Center just 10 minutes down the road from where Beatty worked at Fort Belvoir.

“When I walked in there, everything changed for me,” she said. “I had individual sessions with a female therapist, and 12 weeks of Cognitive Processing Therapy to specifically address my PTSD. I also completed a 12-week trauma group that was designed for women Veterans. I had always felt alone in my trauma, but being surrounded by supportive women who understood what I was going through was comforting. It helped me a lot.”

Beatty said being in the company of other women enabled her to finally begin letting her guard down.

“When you leave military service, you lose that comradery you had. It was like having a built-in family, so when you lose that, you miss it. But going to the Vet Center has helped me feel reconnected. Everyone there is searching for the same thing: to feel whole again. And you can start to feel whole again when you’re in a comfortable space. When you feel safe, the walls start to come down. You can begin to heal.

Beatty said she has only one regret: that it took her seven long years before finally deciding to reach out for help.

“I think I was my own worst enemy,” she said. “In the military they teach you to be strong, to carry on and do your job no matter what. So that’s what I did. But at the Vet Center I learned I don’t have to be super human. I was reminded that I’m a human being who was traumatized, and that I don’t have to handle it all alone.”

To learn more about what Vet Centers can do for you, visit www.vetcenter.va.gov

Previous: Half a World From Each Other, Marine, Son Compete in Virtual Historic Half
Next: Army Delays Most Winter Personnel Moves, But Plans to Grant Exceptions