VA’s Thor Ringler interviews Army Veteran Darrell Krenz, a POW in the Korean War, for the “My Life, My Story” program.

When you’re meeting your new doctor for the first time, do you want her to know that you were wounded during the Tet Offensive in 1968 while trying to pull a wounded comrade out of harm’s way? And that a month later you accidentally shot that same guy in the leg and crippled him for life?

Do you want her to know you fell out of a tree when you were 11 and broke your arm? Or that it was your best friend who actually pushed you out of the tree, and that you’ve had a hard time trusting people ever since?

Well, if you want that kind of stuff in your medical chart, the nice people at the VA in Madison, Wis., will be happy to accommodate you. With your permission, someone will come into your hospital room and spend an hour or so listening and writing, while you tell them your life story.

“We give you our undivided attention,” said Thor Ringler, a writer and therapist with the Madison VA who spends his days listening to patients tell their stories. “We’re there to be a listening presence. You talk. We write.”

Once he has your story written up, Ringler will give you a chance to look it over and make any changes you want.

“Then it goes into your medical chart,” he said. “The next person who reads it will be your doctor, or maybe your nurse, or your respiratory therapist, or any other member of your medical team. It gives them a glimpse of who you really are, all the different things in your life that formed you, as well as the events and circumstances that brought you here to the Madison VA”.

“With an interview like this, you’re able to get so much more information,” said Jennifer Sluga, a 26-year-old Army Veteran who served in Kosovo in 2006-2007. “A provider can’t get that when they talk to you for 10 minutes.”

“I’ve had so many different primary care doctors through the VA over the years,” Sluga continued. “Even if you do get asked about your story, you get tired of telling it over and over. You hold back information. With this interview, I get it out and it’s in the record. I don’t have to talk about the hard stuff if I don’t want to. I don’t have to be strong and put on the soldier face. I know it’s there for the provider to read.”

“With an interview like this, you’re able to get so much more information” Jennifer Sluga, Army Veteran

Sluga said that for anyone who hasn’t served in the military, it can be hard to imagine what some Veterans have been through.

“There are a lot of younger providers who don’t have the life experience to know what it means,” she explained. “You might be sitting across from an 89-year-old Veteran but you don’t know what experiences he has under his belt. If you have his story in the record, you might realize that he isn’t just an old man, but a hero.

“Anything you can do to make a Veteran feel special is worth it,” she added. “Interviewing them and writing their stories does that.”

“Doctors don’t generally have time to listen to your life story,” said Eileen Ahearn, a psychiatrist at Madison who launched the “My Life, My Story” program in March 2013. “But they do have time to read a one or two page summary in your medical chart. It helps them understand who it is they’re treating. You’re no longer just a collection of symptoms. You’re a human being.”

Ahearn remembers reading the life story of a patient she was about to begin treating for chronic depression.

“I was able to obtain a world of valuable information about this patient before I even met him,” Ahearn said. “He had started a woodworking program for troubled teenagers at the local high school. It was very important and meaningful to him, to help these kids. Then he suffered some physical setbacks, and wasn’t able to continue his work at the high school. It was devastating for him.”

“Knowing all this ahead of time was a big help to me when I sat down to talk with him,” she continued. “I already knew his story. I felt like I already knew him, to some degree. I knew why he was sad. Heck, if I was no longer able to do something I really loved, I’d be depressed too.”

She added: “When I read these life histories, I’m not surprised by the terrible hardships and adversity some of these patients have endured in their lives. What surprises me is their resilience. I’m continually amazed at how resilient people are. I find it inspiring.” 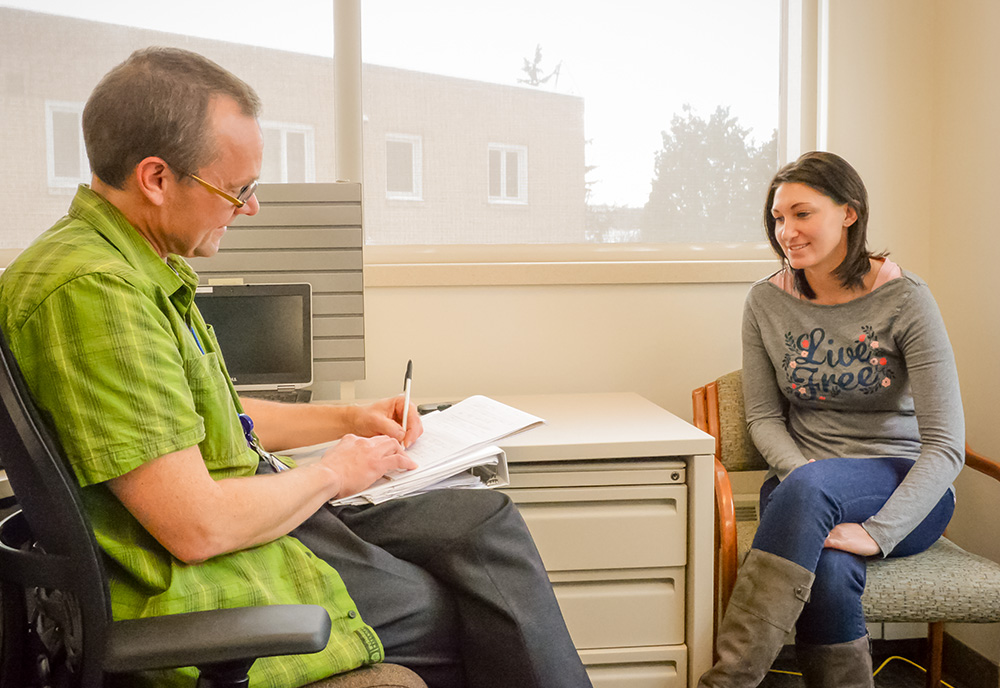 Thor Ringler, the Madison VA’s in-house story writer, said things can sometimes take an unexpected turn while you’re listening to someone talk about their past.

“This one patient was very near the end of his life,” he explained. “He had cancer. He had already given me his story; I was sitting there reviewing it with him so he could make his edits. For some reason we started talking about other things … big-picture things. He asked me if I thought there was anything he should do before he died. He asked if I believed in God. It got pretty deep.”

“These were questions I wasn’t prepared for,” Ringler continued. “I got a little uncomfortable, and realized he should probably be talking to someone other than me … a psychologist, maybe, or a chaplain, or a palliative care specialist. But I was the only one there, so I let it ride. We just talked.”

For a while, Ringler and two other people, a nurse and a counselor were the only ones going from room to room, quietly collecting stories from patients. Now things have changed.

“An article about our program ran in the local paper,” Ringler explained. “Now we have 16 volunteers that we’re training. These are people from all walks of life — physicians, teachers, nurses, lawyers. The response from the community has been tremendous.”

The “My Life, My Story”program was expanded to six other VA hospitals around the country in March. They are White River Junction, Vt., Asheville, N.C., Bronx, N.Y., Iowa City, Iowa, Reno, Nev., and Topeka, Kan. The Madison, Wis. VA is also working with three other VA facilities to supply them a “My Life, My Story” toolkit and project support so that they can launch the project there.

Another interesting approach is a pilot study at a Madison Community Based Outpatient Clinic where the staff interviews VA primary care providers and writes up their stories. When the stories are complete, the providers share the stories with their Veteran patients while they are waiting for their primary care appointments.

Veterans who have read their provider’s story think it’s a good idea:

“More organizations should do this.”

“I enjoyed reading my provider’s story. Knowing additional and personal information about her puts me at ease to share my own story and build a trusting relationship with her.”

The concept is also being introduced to the private sector. According to Ringler, “We are collaborating with the School of Medicine and Public Health at the University of Wisconsin, Madison, to offer a two-week “My Story” elective to fourth year medical students during the spring of 2016. Med students will be trained and ‘embedded’ full-time in the program for two weeks as interviewer/writers.”