The Martinsburg VAMC Police Department has been using the T3 Patroller since 2010 because of its ability to provide rapid response and access to narrow or restricted spaces. The elevated deck allows for a better field of view.

The event will highlight the medical center’s green initiatives. We are expecting the participation of five local schools. Visitors will have a chance to see a few of the recent green innovations during bus and walking tours around the campus.

In recent years, the medical center was recognized with the GreenGov Presidential Good Neighbor Award and the VA Sustainability Achievement Award for its programs and efforts to protect the environment.  The most recent award was the 2014 Green Award presented to the Green Environmental Management (GEM) Committee by the Berkeley Community Pride in March 2015.

Saving the Earth and protecting our environment. 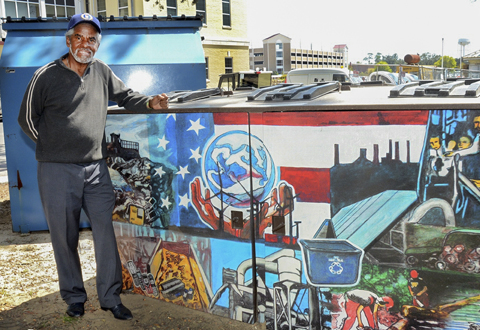 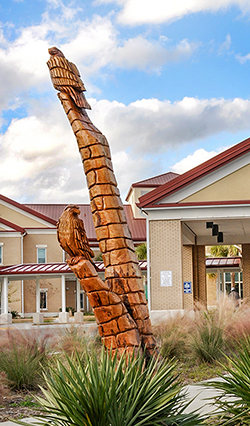 Florida artist Marlin Miller used the remains of an oak tree struck by lightning as his canvas when he carved two eagles in front of the Community Living Center at the Biloxi VA Medical Center. VA employee Forrest Stevens had suggested that rather than removing the lifeless tree, it could be carved into a beautiful piece of art.

The Biloxi VA Medical Center is part of the Gulf Coast Veterans Health Care System, located along the Gulf Coast of Mississippi, Alabama, and Florida.

Our Environmental Management Service, in collaboration with Patient Safety and Engineering Services, developed environmental and sustainability goals for 2014 and made substantial gains in the following areas:

Energy conservation — 35 percent reduction in energy consumption.
Renewable energy — Completed major installation project for photoelectric arrays on three buildings in 2014, which can provide as much as 17 percent of energy needs during maximum production.
Reuse and recycling— Biloxi campus diverted 58 percent of its solid waste into recycling and reuse streams.
Reducing hazardous chemicals — 78 gallons of ethanol and 72 gallons of xylene were recovered through distillation.
Alternative fuel — Purchased 23 additional electric vehicles in 2014, bringing the total number to 104 operational units.

Every day is Earth Day

With the mindset that every day is Earth Day, our employees have identified the following goals for 2015:

Previous: Together, Husband and Wife Deal with His PTSD from Afghanistan
Next: WASPs in WWII: Women Pilots Built Legacy in North Carolina