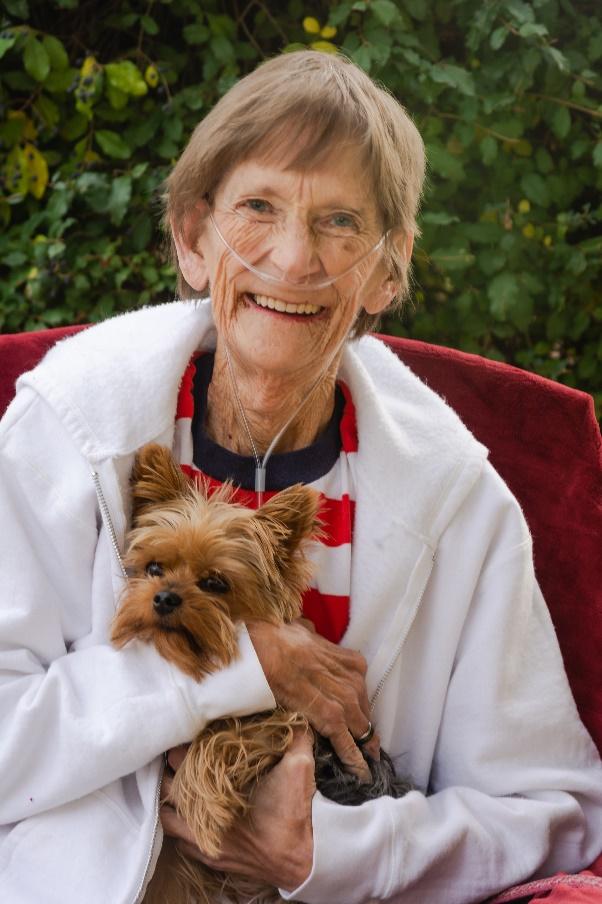 Gifts from the heart are often the most treasured and the most appreciated. Gifts from L’Vell Luv-Gibbs, a California State Fair championship quilter, are heart-felt and priceless. As you would expect, she has quilted unique gifts for her family and friends. “I’ve made quilts for almost all of my children, grandchildren and great grandchildren,” says Mrs. Luv-Gibbs. With her outgoing personality, she makes many friends. Entertainer James Garner who has delighted L’Vell with his Johnny Cash cover band, Walk the Line, is a dear friend. To honor and thank James Garner covering the man in black’s country songs, L’Vell created a special Johnny Cash themed quilt. So the cover band has a special quilt. She even embroidered some shirts for the band.

At 80 years old, it’s getting more and more difficult for L’Vell to attend concerts. After years of marriages and relationships, working full-time and raising four children, L’Vell is now on her own and unable to take care of herself the way she used to. That’s when she and her ex daughter-in-law Judy Short turned to California Caregivers in Sacramento and met Area Director John Wong. In addition to oxygen, Mrs. Luv-Gibbs needed non-medical care such as help with light housekeeping, meal planning, laundry, medication reminders and more. The next obstacle she faced was how to pay for the home care. Medicare rarely covers this type of non-medical, custodial care.

Fortunately, California Caregivers partners with Veterans Home Care. John consulted with Veterans Home Care because as a widow of a Vietnam veteran, John knew L’Vell was eligible for the VetAssist Program and a benefit known as “Aid and Attendance” which can cover the cost of in-home care up to $1,228 per month.

Soon, L’Vell and Judy had an appointment with VetAssist Regional Manager and Navy Veteran Maynard Robinson.

In reviewing L’Vell’s qualifications, the VetAssist Regional Manager learned L’Vell had been married and widowed four times. She married the fourth time at age 60 to a Vietnam veteran. Coincidentally, Maynard realized that while he and L’Vell’s last husband were in different squadrons and never met, they both had flown the same aircraft and worked in the same hangar at the same base.

Maynard explained how Veterans Home Care’s VetAssist Program could help navigate the Veterans Benefits Administration’s application process. Instead of waiting months for the VA to approve her claim and send her funds, the VetAssist Program would get care started right away through a 0%, interest-free loan.

L’Vell was relieved. Having help would allow her to continue her quilting passion and remain in her own home. Meanwhile, along with paperwork, Maynard had brought along a VetAssist Program brochure with the company’s CEO and founder Bonnie Laiderman’s photo on it. It was Bonnie’s passion to start a business to help veterans and their surviving spouses.

Bonnie Laiderman started Veterans Home Care after watching her mother struggle with a terminal illness. Her mom was eligible for military spouse benefits, but sadly Bonnie learned about it too late. After her mother’s death, she realized senior veterans and their families needed help navigating the VA system. Bonnie not only became an expert, but she launched a company that would go on to help thousands get the benefits that her mother never received. L’Vell Luv-Gibbs is one of those thousands.

L’Vell herself will tell you that without her caregiver, she would be completely lost. Yet, she’s not just grateful for her dedicated caregiver. She decided even though she hadn’t met Bonnie Laiderman personally, she wanted to honor Veterans Home Care’s CEO and founder.

It was a natural conclusion that she create one of her quilted masterpieces as a way of thanking Bonnie for starting the movement that got L’Vell the help she needed.

Her plans for the quilt were massive — both in size and in its tribute to Bonnie. She anticipated that the quilt would be 60”x 60” with the words “VetAssist Program” across the top. L’Vell embroidered the official seals of the various branches of the military underneath the “VetAssist Program” banner, symbolizing that the services provided by Veterans Home Care are available to all branches of military. The quilt also features pictures of Bonnie herself, posed and dignified.

L’Vell’s final masterpiece and labor of love took six months to complete. She often spent hours working on the quilt. Many times she would find herself finishing up for the night at three in the morning! Iconic military imagery isn’t the easiest to embroider. There are many details in the official seals. 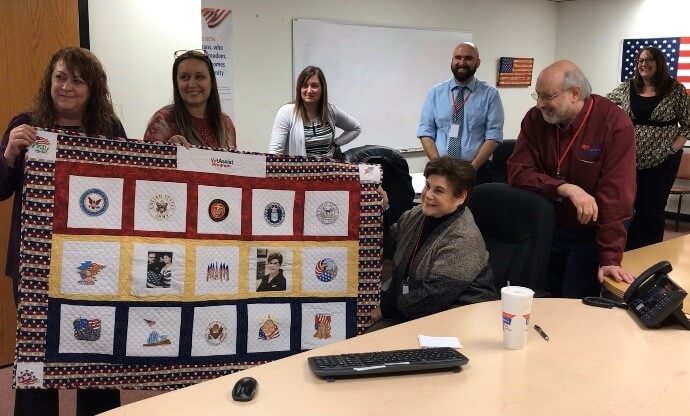 Veterans Home Care Founder and CEO admires a custom-made gift she received from a grateful client, a one-of-a-kind quilt to adorn the company’s headquarters.

“I just want Miss Bonnie to know how grateful I am,” said L’Vell. “I don’t know what I would have done without the help I got from VetAssist. I don’t have much. But I have fingers and I have thread and I can make a quilt. Hopefully that will show her how much this all means to me. To many of us.”

“L’Vell, I absolutely love it,” said a very surprised Bonnie when she met L’Vell on a TV monitor in her company’s conference room. Surrounded by employees and her husband and business partner Howard Laiderman, Bonnie couldn’t stop talking about the intricate design of the quilt and the generosity of L’Vell. “The irony is that I’m in the caregiving business and this client is one of the most caring, kind-hearted women I’ve ever met,” said Bonnie.

After several falls and broken bones, L’Vell admits she’s not as physically strong as she used to be. Yet, her spirit of kindness and gratitude couldn’t be stronger.

Find out if you or your loved one is eligible for the VetAssist Program and the VA Aid and Attendance benefit by calling 888-314-6075 or emailing info@veteranshomecare.com

Previous: After three deployments to Afghanistan, this veteran knows it’s time to leave
Next: He Refused To Die And His Marines Wouldn’t Leave Him